“You put it into your brain, this brain that you use to go through this continuum of aggression, right?” – Juan Martinez

“What I’m saying is that I tried to look at the big picture.” – Alyce LaViolette

“So based on that, they’re enjoying each other, correct?” – Juan Martinez

“My expertise is in domestic violence, not in orgasms.” – Alyce Perjurer LaViolette

“Then why did you answer the question the way you did if you’re not an expert in orgasms? – Juan Martinez

“Your judgment call, is it because you had formed some sort of relationship with the defendant, such that you were not giving the full picture because you liked her? Or, what’s going on here?” – Juan Martinez

“Is that what she means when she is talking to you about domestic violence?

“… and of course when she’s there with Darryl Brewer, it’s not her fault again, that the relationship is souring. No, not at all. It’s not her fault because well, Mr. Brewer doesn’t want to marry her.

What’s a girl to do?” – Juan Martinez

“Well, this individual, that attempted to manipulate you, believes, based on what we’ve heard, that even though she may have engaged in actions, she may have done certain things, none of it — absolutely none of it — is her fault.

Why could it possibly be her fault?

If you look back in her history, which is the important part of it involving her relationships with men, what do you see?

Well, even when she was young, she had this personality of manipulating the facts. Back when she was with Bobby Juarez, what did she tell you? ‘Well, this was an individual that was unfaithful to me.’

‘How could he be so unfaithful to me after I’ve done so many good things for him?’ ‘I tried to buy him clothing, I bought him food. I even lived in a trailer that was so bad it was infested.’

‘Never mind that the reason that I moved there was because I was skipping school — no, that wasn’t my fault at all!’

‘No, no no, I was doing this for Bobby and how does he repay me even though it wasn’t my fault?’

Well, you know what — he goes and he talks — he sent letters to another woman over the Internet.

And it’s eerily reminiscent of what she told you happened in February of 2007, when after she and Mr. Alexander began dating that she went on to his computer and began to hit that same backspace button. It’s not her fault that computers have not been improved since the 90s or the two thousand. So that you can’t stop hitting that backspace button. It’s not her fault that that happened. Of course not.”

[As Alyce LaViolette repeatedly looks toward defense table – perceivably for coaching – Juan Martinez calls her out on the issue.]

”Don’t look over there. I’m asking the questions.” – Juan Martinez 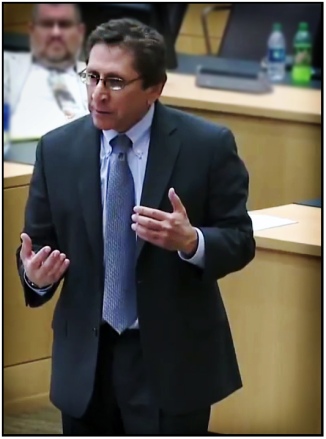 Ms. Willmott: What’s hearsay? She’s not quoting anybody. I’m not understanding what the hearsay is.

Mr. Martinez: Well, then maybe you ought to go back to law school. I mean, she’s talking about an item, an out-of-court statement. How else could she have gotten that knowledge from other than out-of-court statement offered to prove the truth of the matter asserted. I think it’s under, I think, it’s 801 Arizona rules of evidence.

Ms. Willmott: Well, I’m really familiar with hearsay, especially after this trial. I’m also familiar with what hearsay is not, and this is what we’ve been discussing. She’s been talking about subject matter this whole time.

The Court: Where are you going with this? What are you trying to elicit?

“You chose to escalate this didn’t you, even though you had the 12 foot head start, didn’t you?” – Juan Martinez

“No, I didn’t choose to escalate it. I was trying to deescalate it.” – Defendant

“And you chose to deescalate the situation by – according to you – getting a handgun, right?” – Juan Martinez

Juan Martinez beginning his closing argument in the State of AZ vs. Jodi Ann Arias, Count of first-degree murder.

And to top it all off, she has indicated that she is innocent. That no jury will convict her. That none of you, will convict her, after she has staged the scene for you.”

Juan Martinez beginning his closing argument in the State of AZ vs. Jodi Ann Arias, Count of first-degree murder.

“Well again you keep saying ‘I guess’, like you don’t know about time. You own a watch, right? Or at some point in your life, you’ve owned watches, right? [objection]

You know about time, ma’am. You know that movement takes time, don’t you?” – Juan Martinez

“Are you done with your answer?” – Juan Martinez

Gus Searcy: “I only know what he’s told me.”

Juan Martinez: “I want to know what you know.”

Juan Martinez: “And you’re having problems with it today, aren’t you?”

“Washington mutual must subscribe to the law of attraction and didn’t want to put anything negative here.” ~ Juan Martinez